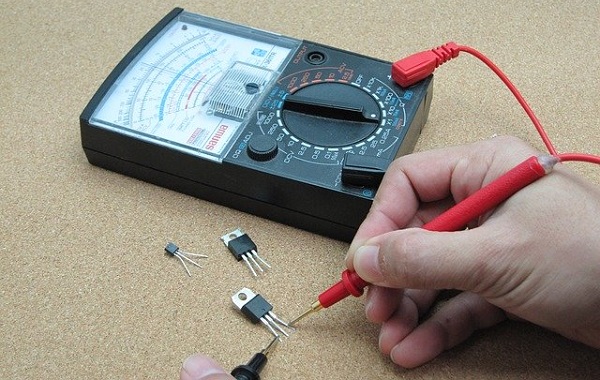 A bipolar junction transistor (BJT) is a semiconductor device that can be used as an electrical switch or a switch to amplify a signal. It's important to measure its beta, which is the gain or amplification factor of a transistor. Beta reflects the proportionality between the base current and the collector current of a BJT set at the forward active mode. Here are some essential terms related to BJT betas and why they create confusion.

The basis of a bipolar junction transistor is a connection between two diodes that generate a third layer of the transistor. The device has two junctions and three terminals (base, emitter and collector).

Beta can be detected for both small and large scale operations. The problem that many technicians face is that manufacturers have helped create confusion between certain terms. For example, It's common to find the symbol hFE instead of the "B" symbol for beta on BJT datasheets. H stands for hybrid, F stands for forward gain and E means common emitter. IC stands for collector current while IB stands for base current.

Furthermore, some people confuse "hFE" with "hfe." Lowercase letters are used for small-signal quantities while uppercase letters reflect large-scale quantities. That's why you may see both forms of the term on the same datasheet with completely different numbers. It's important to remember that beta can vary dramatically from one BJT part number to another.

Beta is not a fixed value when moving from one bipolar junction transmitter part to another. It varies according to operating conditions. When comparing characteristics between DC current gain and small-signal current gain, it's best to keep in mind the differences between hFE and hfe.